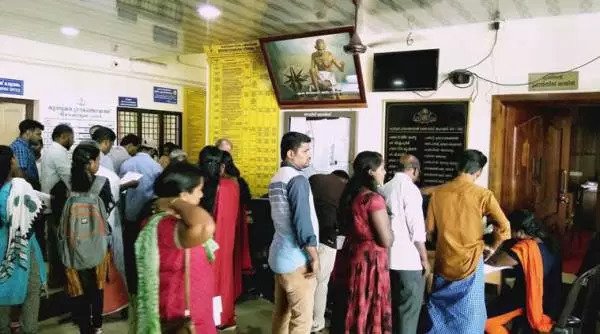 Weeks after the flood waters retreated from most households in Kerala, the state government has initiated a massive exercise in partnership with the Indian Institute of Information Technology and Management, Kerala (IIITM) to retrieve and replace important documents that were lost in the natural calamity such as home/land deeds, ration cards, driving licenses, Aadhaar cards, health insurance cards and school certificates. A pilot project in the form of an ‘adalat’ (forum) took off at the panchayat office in Kunnukara village in Ernakulam district, one of the severely-affected in the state. Officials from the Kerala State IT Mission, representatives from IIITM and those from various departments of the Ernakulam district administration and Akshaya centres set up registration desks at the panchayat office to take stock of the complaints of the people. In less than an hour, close to 50 people reported losing relevant documents. “Through these adalats. what we intend to do is integrating databases of various government departments and providing copies of specific documents to the people. Using a new software developed by the guys at IIITM, a search facility is connected to the concerned department database through an API. Basic details such as name, date of birth and pin-code are entered. In a single search, we may get a lot of results on the same name. We push these details to the department counter where further verification is done of the complainant. The correct record of the complainant is taken out and a copy of the relevant certificate is handed over,” said Ranjith Vappala, the Programme Implementation Manager at the Kerala State IT Mission. “This programme ensures people won’t have to spend time at different government offices looking for their documents. We are getting them streamlined at a single place. It might take a week to get them copies of the certificates,” added Ranjith, who came from Thiruvananthapuram to Kunnukara to oversee the pilot project. After the pilot phase concludes, deficiencies, if any, are analysed before similar adalats are held at concerned taluk offices or local government centres across the state depending on the requirements of the people. Since verification of the documents is an important part of the distribution of compensation, the programme is likely to be fast tracked by the government.